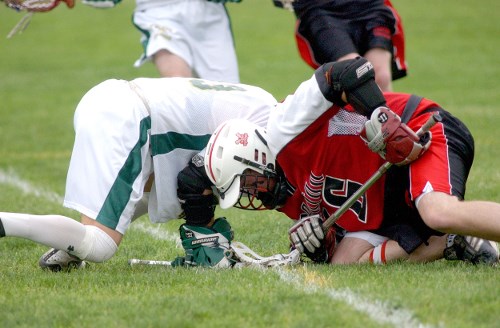 The 2018 high school boys lacrosse rules changes include clarifications to stick alignment and the use of visibly contrasting gloves and shafts, which are expected to ease the game’s officiating.

Overall, the National Federation of State High School Associations (NFHS) Boys Lacrosse Rules Committee adopted and refined numerous officiating-related rules during its July 17-19 meeting in Indianapolis. Collectively, the committee adopted or clarified 15 boys lacrosse rules and officials signals. All rules changes were subsequently approved by the NFHS Board of Directors.

“The committee believes the sport of boys lacrosse is currently in very good shape,” said James Weaver, director of performing arts and sports and staff liaison for boys lacrosse. “The committee is excited to continue looking into the health and safety of the sport, while minimizing risk during its growth.”

Rules 4-3-3d and 4-3-3n were among the most notable changes to officiating calls. Stick alignment clarification as part of Rule 4-3-3d now states that during faceoffs the reverse surfaces of crosses must match evenly so that the top of one head lines up with the throat of the other and they are perpendicular to the ground. A note was added to Rule 4-3-3n to add flexibility in achieving color contrast between the shaft, glove and head. However, the rule now specifically states the circumference of the shaft shall not exceed 3.5 inches, and a contrasting color between the head and the top glove must be visible on the shaft during faceoffs.

For the second year in a row, the committee made a point to clarify proper mouthpiece usage. Rule 6-5-2x addresses this with a clarification that a penalty will occur if a mouthpiece is not properly worn inside a player’s mouth. Weaver noted that it must not “fish-hook” outside of the mouth.

Additional changes include better defining home and away jerseys with Rule 1-9-1g(8), as well as the approval of Rule 1-7-5 to allow crosse pockets of manufactured nontraditional synthetic material.

The adoption of Rules 1-2 and 4-9-2o were among the most significant committee changes not closely aligned with officiating, according to Weaver.

The adoption of Rule 1-2 offers schools a third potential field layout. To provide economic relief, the committee introduced a unified boys and girls field that allows schools to line one set of shared boys and girls lacrosse field markings.

“If schools choose to use the unified field option, fields will all be 120 yards like the girls field is currently,” Weaver said. “It would also use the girls arch, but the notable changes include additional space behind the goal for boys. In the past, this was a 10-yard space behind the goal but is now a 15-yard space. On the girls side, the goal is becoming two inches smaller while the boys goal remains the same.”

A complete listing of the boys lacrosse rules changes will be available on the NFHS website at www.nfhs.org. Click on “Activities & Sports” at the top of the home page, and select “Lacrosse-Boys.”

According to the 2016-17 NFHS High School Athletics Participation Survey, there are 111,842 boys participating in lacrosse at 2,900 high schools across the country.