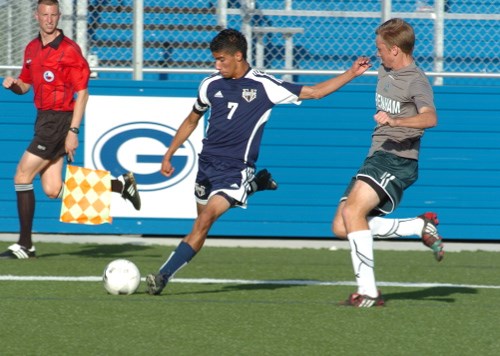 A new interpretation of the offside rule in high school soccer is among the rules changes approved for the 2016-17 season.

The new language regarding offside in Rule 11-1-4 is one of two major changes recommended by the National Federation of State High School Associations (NFHS) Soccer Rules Committee at its January 25-27 meeting in Indianapolis. All rules changes were subsequently approved by the NFHS Board of Directors.

“The rules are in fairly decent shape,” said Theresia Wynns, NFHS director of sports and officials and liaison to the Soccer Rules Committee. “The committee wasn’t looking to make wholesale changes. They were looking at existing rules and making sure they reflected today’s trends in the playing of the game.

“Offside is one call in soccer that was identified in the annual NFHS survey as being incorrectly administered,” Wynns said. “This change makes offside more understandable and should result in better administration of the offside rule.”

The new rule changes this situation as the attacking player in an offside position when the ball was kicked by a teammate who gets a rebounded or deflected ball after it was deliberately played by the opponent (except from a deliberate save), is no longer offside and  is not considered to have gained an advantage.

“An example of this new rule would be if attacking player A1 kicks the ball to teammate A2 who is in the offside position behind defender B, and defender B jumps to play the ball but is unable to control the ball as it touches the top of his/her head and deflects to Player A. In this situation, since B played the ball, A2, although in an offside position, is not offside,” Wynns said. “One important point to remember about offside is that being in an offside position does not mean that a player is offside. To be offside, a player must be involved in active play, interfering with play or an opponent, or seeking an advantage.”

“An example of a violation by the kicker in a penalty kick situation is an interruption of movement in the approach to the ball,” Wynns said. “Previously, this violation would result in a verbal warning and a rekick. Under the new rule, the ball can be kicked and the result is the same as any other attacker violation. One result might be that the goalkeeper saved and held the ball. In this case, play will now continue, where previously a rekick would occur. The committee wanted to be a little more consistent with penalty kicks.”

A complete listing of all rules changes will be available soon on the NFHS website at www.nfhs.org. Click on “Activities & Sports” at the top of the home page, and select “Soccer.”

More Than Anything Else, Students Play Sports to Have Fun with Friends