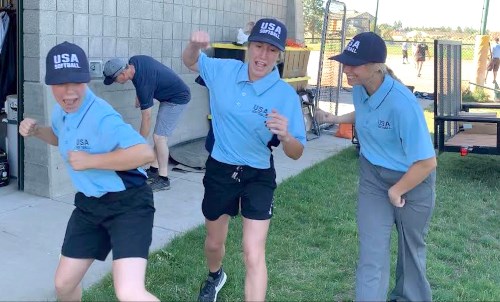 Three Bend (Oregon) High School varsity softball players have a new appreciation for umpires after getting experience seeing the profession up close and personal as umpires themselves.

“My appreciation for umpires has increased so much,” said senior Violet Loftus. “They are out there working just as hard as the players are, and they are running and hustling and paying attention to everything.”

Senior Emma Sullivan echoed her teammates’ perspective. “I do have a greater appreciation for what they do and their hard work. I no longer question umpires or get angry at them because I (now) understand their point of view.”

Both added umpiring is “a lot more stressful and difficult” than they thought. But it’s also fun and rewarding.

It didn’t take much to convince the Lava Bear girls that umpiring is difficult. But as the saying goes, “somebody’s got to do it.” In this day and age, the numbers for officials are declining from coast to coast.

And somebody better, indeed, do it.

Recruiting for officials has become almost a full-time job. The Oregon Schools Activities Association (OSAA) and the NFHS promote and plead almost weekly the need for more officials.

Both organizations are broadcasting the “urgent need” for officials in all sports, not just softball.

Sullivan and Loftus, along with junior Sophia Weathers, were recruited by umpire Dennis Chaltraw after he umpired Bend High School’s 3-1 victory over Sheldon in Eugene.

“After officiating the amazing game between Bend and Sheldon (Sheldon was 15-0 at the time, Bend 14-1), and seeing the wonderful sportsmanship displayed by the Lava Bears in their extra inning, 3-1, win, I knew I had found my officials for the summer ball somewhere on that team.”

Chaltraw is head of Oregon’s JAG umpire crew associated with USA Softball of Oregon. With an expansion of youth girls tournaments planned in Oregon and the ever-growing umpire shortage, he is always in recruiting mode.

Once Chaltraw had been given permission to contact the players, the process began to get the girls trained and on the field. Training began with JAG softball officials Kelli Demianew, Faith Tuttle and Chaltraw.

“The Rookies,” as Chaltraw calls them, made their debut working the bases at the Redmond High Desert Classic in early June.

“Although they were a bit nervous before the first game, their experience as upper division softball players quickly took over as they were able to read the plays and anticipate where the ball was going next,” said Chaltraw. “They were exceptional for their first time on the field.”

Umpiring isn’t simply calling balls or strikes or making calls on the bases. It’s about positioning, anticipating and knowing all aspects of the games.

“It’s about you and your partner … making the right call in the right position,” said Tad Cockerill, head of the Central Oregon Umpires Association. “It’s about the raw emotion of competitive sports.”

The Lava Bear trio understand the “raw emotion of competition,” but the learning curve from player to official was huge. All three said they had moments when they were “tested.”

”There are definitely a lot more little details to umpiring than I thought there were,” said Sullivan.

“I was yelled at by a few coaches on the sidelines, and I had a couple of my calls questioned,” said Sullivan. “But only one of them was changed because my plate umpire had a better view.

“I kept my cool and simply asked my partner what their thoughts were, whether they agreed with me or not,” she said. “I didn’t ever let coaches’ anger get the best of me or intimidate me in any way.”

Chaltraw said the hardest thing for “rookies” is to “sell an out” or “sell a safe.” He said umpires must make a strong, convincing call one way or the other.

“It didn’t take them long to realize that their enthusiasm when making these close calls really is designed to reward the defense or reward the offense on a fine play,” said Chaltraw.

No one is simply born to umpire. It’s a learned profession.

“It was intimidating and difficult to understand at first, but once you get in a game it all comes together,” said Loftus, who earned 6A all-state honors as a junior. “The first game you have bases or the plate, you will make mistakes and forget to do things. But that second game you’ll feel on top of it and it will be easy. It’s just like anything – practice makes perfect.”

The Bend High girls graduated from umpiring in the field to umpiring behind the plate during a youth tournament in Salem over the Labor Day weekend.

Weathers had two separate experiences that are etched in her memory. She said in her first game behind the plate she “heard everything the crowd, coaches and players were saying about how I was doing.

“I heard everything instead of blocking it out as I usually would while I’m playing softball. I truly didn’t want to get back out onto the field for my second plate game, but after talking with more experience umpires, I learned that was totally normal.”

Weathers said her experience as a catcher was key in her second game and a much more positive experience.

“Because of my catching I understand the game and all I was doing was looking at it from a different perspective. After that, I had a great experience behind the plate.”

Weathers said she had “quite a bit of fun” in calling the game.

“I am so grateful for all the veteran umpires who worked me through my first plate game jitters,” she said.

“Their commitment to studying umpiring mechanics and participating in a deep dive of base umpiring was inspiring; they were really impressive and a great joy to work with.”

All three players said they are looking forward to umpiring again.

“I will most definitely umpire again, the other umpires are always so nice and helpful, they teach you along the way,” said Loftus. “They are very supportive people and even if you’re feeling extremely unconfident, they pick you back up and help that confidence come back.”

Sullivan added, “Absolutely. It was far more fun than stressful. I’m so glad I did it. For the experience and the good memories of being an umpire with my teammates. It definitely benefits me in my sport.”

Like the Bend High girls, Chaltraw began his umpiring career in high school. He umpired during his time in the Navy, then in California before coming to Oregon.

“The beauty of officiating is you can go anywhere in the country and earn money by being a much-needed official,” said Chaltraw. ‘It’s very rewarding.”

Both Cockerill and Chaltraw have coached at the highest levels of softball and baseball and say the rewards and the hard work at mastering their profession are well worth it. And both encourage anyone of any age to experience umpiring.

Cockerill said being on the field umpiring a game you love when you are too old to play is immensely rewarding and has created many friendships over the years.

Cockerill got his umpiring start in 1987 when a friend asked him to “fill in” for a Babe Ruth game.

“I said ‘why not’ and he handed me some gear, told me where to be at what time and what to wear. I had played baseball since first grade, and loved the game so I jumped in.”

Though he doesn’t umpire as often as he once did, the COUA commissioner is head baseball rules interpreter for the OSAA. He also trains and schedules umpires year-round.

“I ended up umpiring all the way to DII college baseball,” said Cockerill. “I still umpire slow pitch softball and occasionally a high school game when needed.

“Would you rather work somewhere for $13 an hour selling burgers, or make nearly $30-plus an hour being on the field as an official in a sport you love?”

“Umpiring has been very rewarding to me and my family; it is a big part of who I am,” Cockerill said.

Chaltraw said “the amazing success Sophia, Violet and Emma had this year will only serve to give them confidence to overcome many obstacles life will send their way. Officiating helped them to believe in themselves more than they already did; and quite frankly, the fun they had hanging with their fellow officials is an intangible that new officials don’t expect – the value of camaraderie and the belief that you’re not alone in this endeavor cannot be understated.”

Mauldin said he figured the Lava Bear girls would do well, noting they are “bright, aware, athletic and have high character. They take pride and passion in all things they do.”

He also said “thank you” to the umpires and at the same time issued a suggestion and a warning.

“I guess as coaches we need to do a better job showing our appreciation,” said Mauldin. “If not, the shortage of officials will continue. Everyone knows how critical they are to every game. So, again, I say ‘thank you.’ We can’t play without them.”

Anyone wishing to become an official should contact their local umpiring associations and/or state high school association.

Tom Mauldin is a retired journalist and current softball coach at Bend (Oregon) High School. He is a former writer and softball/volleyball editor for MaxPreps. He is currently senior advisor for Fastpitch Northwest and a private hitting/pitching coach. Mauldin is a former head and assistant college coach, and his playing and coaching experience includes more than 3,000 fastpitch softball games.

The Baseball Rule: Liability to Spectators for Foul Ball Injuries

The Importance of Building a Brand in High School Sports Programs