Pitching Restriction Policies in Baseball to be Based on Pitches 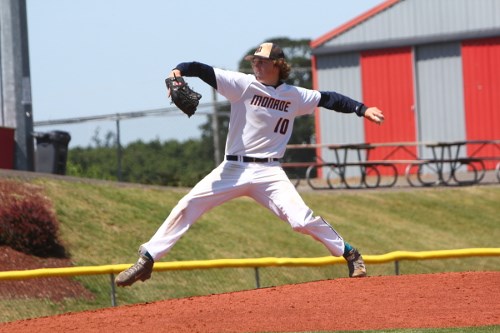 High school baseball rules now will require a pitching restriction policy based on the number of pitches thrown in a game.

Each NFHS member state association will be required to develop its own pitching restriction policy based on the number of pitches thrown during a game to afford pitchers a required rest period between pitching appearances.

“We’re pleased that the rules committee worked in conjunction with the NFHS Sports Medicine Advisory Committee to find an acceptable and reasonable modification to this rule in order to emphasis the risk that occurs when pitchers overuse their throwing arm,” said Elliot Hopkins, NFHS director of sports and student services and staff liaison for baseball.

The Baseball Rules Committee also revised Rule 2-32-2 regarding sliding into home plate. The revised language states: “At home plate, it is permissible for the slider’s momentum to carry him through the plate in the baseline extended.” The committee altered this rule since the physical design of home plate makes it difficult for a runner to break momentum on a slide – as opposed to the other three elevated bases which are elevated.

The committee also revised Rule 3-3-1, which states the umpire has the ability to give three warnings to a coach or player before he or she is removed from the game.

“Officials now have the opportunity to provide a tiered warning system for coaches or players,” Hopkins said. “It provides the coaches or players with a teachable moment to change their unsportsmanlike behavior in order to stay in the game.”

A new article 6 was added to Rule 8-3 to provide a rules reference for an existing ruling in the Baseball Case Book. The new article reads: “When a plate umpire hinders, impedes or prevents a catcher’s throw attempting to prevent a stolen base or retire a runner on a pickoff play, if an out is not made at the end of the catcher’s initial throw, the ball shall be dead and all runners shall return to the bases occupied at the time of the interference.”

A complete listing of the baseball rules changes will be available on the NFHS website at www.nfhs.org. Click on “Activities & Sports” at the top of the home page, and select “Baseball.”

According to the 2015-16 NFHS High School Athletics Participation Survey, there are 486,567 boys participating in baseball at 15,899 schools across the country, and 1,203 girls playing the sport in 260 schools.