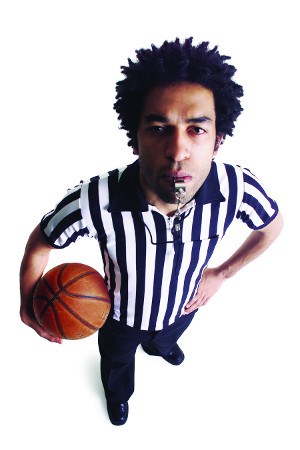 Long odds stare at an official before he or she even takes that first step onto a court, field or sheet of ice. New officials face a journey filled with criticism and angst that, ultimately, lead most to quickly and defiantly blow the final whistle on the avocation.

The rewards of officiating aren’t immediately realized in the face of sportsmanship issues that have created an exodus of officials that is at an alarming rate.

National surveys reveal an average of about only two out of every 10 officials return for their third year of officiating. The low return rate is paving the way to a nationwide shortage of officials that has high school administrators scrambling to cover games. It is also prompting high school associations across the country to formulate creative ways to retain the officials they have rostered.

“Year 3 is when we cross our fingers,” said Mark Uyl, an assistant director with the Michigan High School Athletic Association. “It is like the freshman year in college. It is a make-or-break kind of year. Every state association in the country is feeling the effects of an officials’ shortage. It is getting harder and harder, not only to recruit new officials, but to retain them for years to come. That is the challenge that confronts us.”

Solutions can’t come soon enough for Matt Percival, the activities director at Eastview High School in Apple Valley, Minnesota, in suburban Minneapolis-St. Paul. With game-time looming, it is common for Percival to be scrambling, moving quickly to fill officiating vacancies, primarily at the sub-varsity levels.

Percival said moving games to different days of the week has been implemented, and this travel may continue to ensure that games will be staffed with officials.

“The problem isn’t new,” he said. “It’s gotten progressively worse over the years. One of the most stressful things for an AD is when officials aren’t assigned or don’t show up. When that happens, no one benefits.”

Programs to combat the challenges of recruiting and retaining officials are popping up throughout the country by state associations.

The Minnesota State High School League (MSHSL) has offered discounted registration fees to new officials, as well as reduced rates when they return for their second and third seasons of officiating. In 2015, the MSHSL launched a “Thank A Ref” campaign encouraging its member schools to show support for officials.

The MHSAA website is dotted with photos of officials posing with mentees and sharing their purpose statements.

The South Dakota High School Activities Association advertises the need for officials with a classified adstype section on its website, identifying games that need officials.

“We are losing officials because of sportsmanship issues from participants, coaches and fans,” said Pete Vrieze, commissioner of the Middle Border Conference in northwestern Wisconsin. “We certainly lose officials to other things as well, but for the most part, on-court issues are driving newer and younger officials away. They say ‘the heck with it’ and aren’t interested in spending their free time in oftentimes volatile situations.”

Veteran officials and officiating administrators agree that establishing strong mentorship programs are vital to helping new and younger officials cope with negative on-court situations. Those relationships
help provide stability to a new or younger official and provide a sounding board to help get through troublesome times.

“When things go south for an official, you’ve got to have that sounding board, someone that knows and understands what they are going through,” Uyl said. “The biggest thing you do as a mentor is listen and then reinforce all of the positives of officiating. Ninety- to 95-percent of the officiating avocation is a great, great thing.”

Vrieze oversees the mentorship program as the director of basketball operations for the Minneapolis Officials Association, a pioneer organization in Minnesota that for decades has provided football and basketball officials for the MSHSL.

“As officials, if we don’t get a pat on the back once in awhile, it can be a discouraging thing,” Vrieze said. “We need mentors with passion, someone that wants to help others. We aren’t interested in veteran officials that are worried about losing their assignments to new and younger officials. We need officials to have the mentality that I need to train officials not to replace me, but to work with me.”

Not advancing through the officiating ranks quickly enough is also contributing to the avocation’s struggles to maintain a strong roster of officials.

“We are in the ‘I’ generation and them asking why I wasn’t there yesterday,” said Harry Kitts, a retired Minnesota educator who officiated and was an assignor for more than four decades.

Kitts officiated for four years in Iowa before beginning his officiating journey in Minnesota in the 1969-70 school year. Most of the officials in that era were educators who would work games following the school day. If officials weren’t available, coaches would be recruited to work games.

Working a doubleheader was commonplace, too. There was no such thing as just a varsity assignment as is the case now. If you were a varsity-caliber official, you were also required to work the B-squad game prior. Kitts said officials accepted all and any assignments given to them, unlike today when officials present specific criteria of the games they will work to their assignor.

Despite his experience in Iowa, Kitts was not assigned a varsity game in his first season in Minnesota. His first varsity game would not come until his second season. He credits working with a veteran official who gave him his chance to show his skills. Kitts would move on to work 20 MSHSL state tournaments.

“Officials are too anxious these days to sprint right to the top and to do a state championship game right away,” Kitts said. “Officials need training. They must learn and work their way up, just like anything else. When officials don’t feel like they are climbing the ladder quickly enough, they often quit out of frustration.”

State association administrators remain focused and diligent that the campaigns to recruit and retain officials will be a success.

“Our success and experience in officiating give us the confidence moving forward,” Uyl said.

Tim Leighton is the communications coordinator for the Minnesota State High School League and a member of the NFHS High School Today Publications Committee.