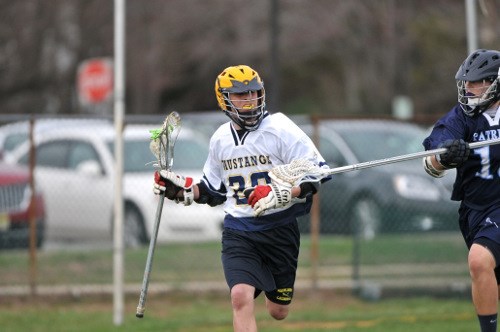 Starting next year in high school boys lacrosse, play may be restarted with a defensive player within 5 yards of the player in possession of the ball. In such cases, defensive players must adhere to certain conditions or they may be subject to a delay-of-game technical foul.

The amended restart protocol was one of 10 rules changes recommended by the National Federation of State High School Associations (NFHS) Boys Lacrosse Rules Committee at its July 15-17 meeting in Indianapolis. All rules changes were subsequently approved by the NFHS Board of Directors.

“This change allows for rapid restarts to increase pace of play while making the game more engaging,” Weaver said. “Additionally, the change balances technique between offense and defense.”

Under mandatory equipment listed in Rule 1-9-1, shoulder pads and chest protectors used by players must be designed for lacrosse. Additionally, goalkeepers must wear a chest protector designed for lacrosse that meets the National Operating Committee on Standards for Athletic Equipment (NOCSAE) ND200 standard at the time of manufacture beginning January 1, 2021, while shoulder pads for field players must incorporate the NOCSAE ND200 lacrosse standard for chest protection beginning January 1, 2022.

NOCSAE ND200 protection will be available on the market for field players and goalkeepers this fall.

“Health and safety of players is of the utmost importance,” Weaver said. “The NOCSAE ND200 standard for lacrosse will provide valuable protection for all players in the game.”

In a change to Rule 5-5, the penalty for an illegal crosse is no longer a tiered penalty and is now a two-minute, nonreleasable penalty – regardless of the infraction.

Throwing a crosse, referenced in Rules 5-10 and 6-5-2, is now an infraction in all cases. Throwing the crosse at a ball, player or other game personnel is considered unsportsmanlike conduct, which is met with a one- to three-minute non-releasable penalty and in all other cases falls under illegal procedure.

Under the Chief Bench Official’s (CBO) responsibilities in Rule 2-7-2, the CBO is no longer responsible for penalizing a team with too few players on the field. However, delayed substitutions — when a player gains an advantage by delaying entry onto the field — still fall under the CBO’s duties.

The committee eliminated three definitions under “Play of the Ball Definitions” in Rule 4-5 – ball in flight, team possession and completed pass, which were deemed to no longer be needed.

Changes to Rules 6-1-1 and 6-2-1 focus on streamlining changes made to the slow-whistle technique in Rule 7-8-2 over the past two seasons.

Finally, Rule 4-24 clarifies that a time-out for a player with symptoms consistent with a concussion is an official’s time-out, not a team time-out.

A complete listing of the boys lacrosse rules changes will be available on the NFHS website at www.nfhs.org. Click on “Activities & Sports” at the top of the home page and select “Lacrosse-Boys.”

According to the 2017-18 NFHS High School Athletics Participation Survey, there are 113,313 boys participating in lacrosse at 2,957 high schools across the country.

by Luke Modrovsky is a 2019 summer intern in the NFHS Publications/Communications Department. He is a senior sports management and communication studies student at Wilkes University in Wilkes-Barre, Pennsylvania.