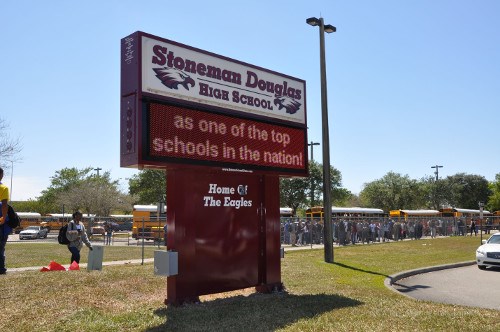 Often in life, things simply do not make sense and we have no easy answers. Certainly, that was the case last month as a former student at Marjory Stoneman Douglas High School in Parkland, Florida, entered the school at dismissal time with a semi-automatic rifle and killed 17 people – 14 students and three staff members.

When these types of events occur, we are left with more questions than answers. Our hearts go out to all of those affected by the Parkland shooting as well as about a dozen other school-related shootings that have occurred already this year. On many fronts, we must find answers to these senseless acts of violence that occur in our nation’s schools.

While the results of the Parkland tragedy were horrific, think for a moment what the scene might have been like on the day of the shooting, as well as the days of recovery afterward, without high school sports.

Chris Hixon, the athletic director and wrestling coach at Douglas High School, was gunned down by the shooter as he boarded a golf cart and raced toward the sound of gunfire – all in an effort to protect the students. He reportedly tried to disarm the shooter.

A rival wrestling coach from Cypress Bay High School, Allen Held, told the Miami Herald, “He (Hixon) was trying to move kids out of the way of the shooter and that is 100 percent Chris because he was looking out for them and they adored him for genuinely caring about them.”

Hixon was so dedicated to his students that when coaching vacancies forced him to consider dropping various sports, he coached them himself. At different times, he coached five sports at the school.

Aaron Feis, an assistant football coach at Douglas, was another staff member who was killed in the rampage. Feis was gunned down by the shooter when he threw himself in front of students to protect them from oncoming bullets. As a fellow staff member said, “He died the same way he lived – he put himself second.”

The other staff member who perished in the attack was Scott Beigel, a geography teacher at the school who was killed as he tried to usher students back into his classroom when the shooting broke out.

These men died performing acts of heroism. Not only did they prevent other students from perishing that day, the lessons they taught on a daily basis as coaches and teachers will have a profound impact in the lives of hundreds of young people for years to come.

Understandably, life stopped for the 3,000-plus students at Marjory Stoneman Douglas High School on February 14. It wasn’t until the last day of February – two weeks after the tragedy – that students returned to school.

A couple of the school’s sports teams, however, helped in the return to normalcy prior to the start of classes. Two days after the shooting, the Douglas High School baseball team returned to practice at a neighboring school since the Douglas campus remained closed.

Baseball coach Todd Fitzgerald told the Florida Sun Sentinel that “at the end of the day, I think you have to get back in a routine. We cried. We hugged. We loved. I told them that they had a responsibility to the rest of the community and school to uplift the spirits.”

On the very day of Hixon’s funeral one week after the shooting, the school’s wrestling team formerly coached by Hixon continued the process of helping the school, students, teachers, coaches, parents and others begin the healing process and a return to normalcy.

After attending the funeral in Hollywood, Florida, the team boarded a bus to compete in the sectional tournament in Coral Springs. The school’s girls basketball coach, Marilyn Rule told ESPN, “He would’ve wanted them to continue. To go out there and wrestle, and do the best they can.”

Thirteen of Hixon’s wrestlers made the trip to the sectionals, including one female, Sara Ochoa. In her first match in the 160-pound weight class, Ochoa pinned her male opponent in 16 seconds, and ran into the arms of assistant coach Daniel Sanchez.

“That was for Coach Hixon,” Ochoa told ESPN, “He encouraged me, made me feel a part of the team, made me run when I didn’t want to run. All I kept thinking at the funeral was that I would never hear him say, ‘Sara, stop dancing on the mat.’ Oh God, I hope he was watching that.”

In the March issue of High School Today magazine published by the NFHS, Kevin Fitzgerald, a superintendent in Delaware and a member of the NFHS Board of Directors, implores school administrators to not cut athletic programs when budgets get tight. He noted that “school-based athletics has immeasurable value and has repeatedly proven to be the heart and soul of a community.”

After the events in Parkland, Florida, last month, we would say “Amen.”

Climate Change and Emerging Technologies are the final choices for th.