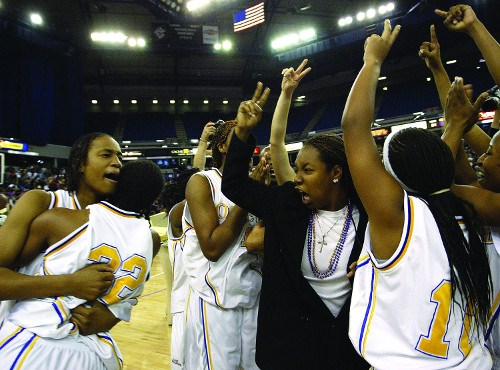 High school athletic administrators have many hats to fill, from scheduling contests and officials, to maintaining the school’s facilities and budgeting for needs of all the school’s activities.

In addition, athletic directors are responsible for hiring coaches and making sure that these individuals have the best opportunity possible for success.

Recognize and Reward Team-Focused Behaviors
“What gets measured, gets managed.” –Peter Drucker

Individuals encourage the behavior of the things they can measure. If individual statistics are measured and individual performances are rewarded, individual behavior is encouraged. The values and behaviors
that define success for a team should be defined, and encouraging and rewarding those behaviors should be consistent.

Create Opportunities for Communication
“Whether you’re on a sports team, in an office or a member of a family, if you can’t trust one another there’s going to be trouble.”
–Stephen M.R. Covey

Trust and dependence on the team is critical. Team members will only extend themselves and exhibit unselfish behavior for people they trust. It is difficult for trust to occur if teammates do not know each other. Open, honest communication is the first step to building a culture of trust.

Trust built off the playing field shows up in how team members trust each other on the playing field. Unfortunately, in an age where everyone has their own phone, these interactions do not tend to occur naturally.

It is necessary to create opportunities for team members to actually talk and listen to each other for the purpose of understanding each other.

Here are a couple of suggestions:
On bus rides, institute a “no cell zone” to force communication among teammates. Also, consider requiring a questionnaire for players to get to know each other, using the example of the exercise in the movie “Remember the Titans.”

Invest in Your Leaders
Team leaders have more influence on their teams than their coaches. Due to peer influence, common experiences and shared proximity, team leaders shape the attitudes and beliefs of their teams.

In order to assist these individuals, the resources within your school, community and alumni should be utilized to help train your leaders.

Ownership
“Rental cars don’t get waxed.“
Though related, ownership is not the same thing as leadership. People tend to treat things differently when there’s a sense of ownership. Shift the power to the players – it is their team.

Consider starting a “Breakfast Club” for coaches to meet with team leaders on a regular basis. Coaches or administrators should do more listening than talking so that team leaders can be empowered. Leaders can share the school’s vision and values with this leadership group, and the students’ buy-in will permeate the team.

One of the biggest complaints from coaches and administrators throughout the country is the apparent lack of drive in our young people. While we can’t make someone “hungry,” it is important that we put them in situations where they constantly push themselves and each other to be their best.

In many cases, when people reach a certain level of success, they get comfortable and ease up. As soon as a person reaches a goal or believes that things are good enough, there is a natural tendency to start taking it easy and become less disciplined. They don’t push quite as hard because they are now satisfied.

Certainly, it is great to celebrate victories; however, don’t celebrate so long that complacency sets in. The team has more to do as it strives to reach its full potential. Teams should set their sights on bigger goals and push to get past the point where they think they are good enough. Teams should be challenged to be their best.

Lee Rubin is a nationally recognized author and speaker. The former Penn State football team captain and human resources professional now shares his wisdom on topics such as leadership, team-building and peak performance. Rubin has spoken to thousands of school leaders (predominantly student-athletes) regarding respect through his anti-bullying/hazing workshop. For more details, visit www.leerubinspeaks.
com.