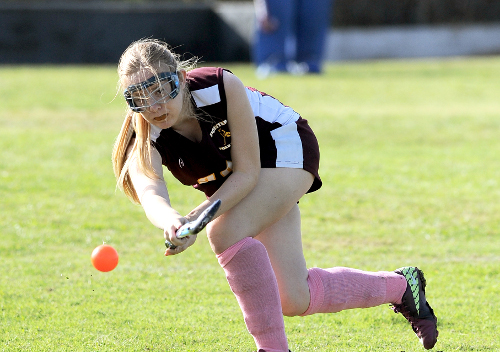 With appropriate open space and no players approaching, high school field hockey players will be permitted to raise their sticks above the shoulders to stop, receive and deflect or play the ball.

This revision of Rule 3-2-11 was one of 10 rules changes recommended by the National Federation of State High School Associations (NFHS) Field Hockey Rules Committee at its January 14-16 meeting in Indianapolis. The rules changes were subsequently approved by the NFHS Board of Directors.

The new skill allowance seeks to improve the flow of the game and maintains players are capable of determining when it is acceptable to utilize this skill. However, sticks raised high in the front or back when players are approaching or within playing distance is deemed dangerous and/or intimidating, and will still be disallowed.

“It’s part of the evolution of the game,” said Elliot Hopkins, director of sports, sanctioning and student services and liaison to the Field Hockey Rules Committee. “Coaches are teaching their players to have more spatial awareness. If players can play the ball in a wide open space, why shouldn’t they be allowed to do this? If a pass is high, and they’re all alone, they should be able to just reach up and knock it down.”

Rules 1-5-6, 1-6-11 and 1-7-7 were also updated to alter the penalty system following the removal of a player for an illegal uniform or illegal/insufficient equipment. Coaches will now be assessed misconduct penalties as opposed to the player, and the player will be substituted out under normal substitution patterns. Before, the offending player’s team was also required to relinquish possession to its opponent.

“The committee thinks this is the responsibility of the coaches,” Hopkins said. “They’re the ones verifying to the umpire that their team is compliant, so let’s not penalize the kids or change the possession. A change of possession, in a low-scoring game, changes the entire dynamic of the game.”

Rule 2-2-4 was altered to require a visible clock to be the official clock if available. If no visible clock is available, time will be kept at the officials’ table. Either way, the umpire’s whistle will signal the official end of each half. This was done to ensure that teams, officials and fans all have access to the same information.

A complete listing of all rules changes is available on the NFHS website at www.nfhs.org. Click on “Activities & Sports” at the top of the home page, and select “Field Hockey.”

According to the 2013-14 NFHS High School Athletics Participation Survey, field hockey is played by 61,471 girls in 1,795 programs nationwide.

This press release was written by Ben Sieck, a spring semester intern in the NFHS Publications and Communications Department and a junior at Butler University.