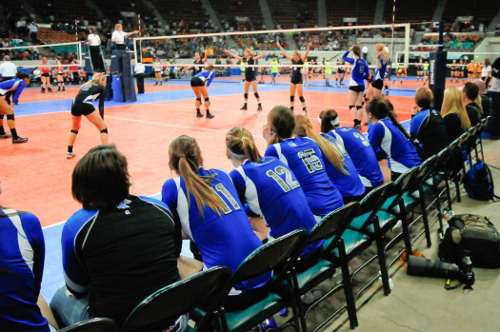 A new penalty system for an unnecessary delay in starting or resuming play in high school volleyball was approved by the National Federation of State High School Associations (NFHS) Volleyball Rules Committee at its January 5-7 meeting in Indianapolis.

This significant rules change, along with three others recommended by the committee for the 2015-16 season, were subsequently approved by the NFHS Board of Directors.

The new penalty system addresses concerns that the previous penalties were too severe. Before, an unnecessary delay would result in the loss of a time-out. If a team had exhausted its time-outs when the delay occurred, then it would lose possession of the ball, and the opponent would receive a point. An unnecessary delay, as specified in Rule 9-9-1, will now be met with a warning (administrative yellow card) on the first offense. Any subsequent delay during the same set results in an administrative red card with a loss of rally/point awarded to the opponent.

“The committee wanted the penalty to match the violation occurring,” said Becky Oakes, NFHS director of sports and liaison to the Volleyball Rules Committee.  “The previous penalty was viewed as too severe for rally scoring.”

Another rule change alters the substitution procedure following a time-out. Under Rule 10-2-5, teams will now be required to return to the court following a time-out. A team wanting to make a substitution will do so at the end of the time-out, and that change will follow normal exchange procedures. Oakes said the rule will help officials, coaches and fans better follow the on-court proceedings.

The other two changes update rules regarding incorrect lineup cards and the length of time between sets when using an intermission. With regard to the lineup card ruling, Rules 7-1-5 and 7-1-6 dictate if a player is wearing a number not listed on the roster, or is wearing a duplicate number, then the offending team will be charged with a substitution to correct the error. The change aims to maintain consistency with similar rules, and to further encourage coaches to submit correct lineup cards.

The final change to Rules 11-5-1 and 11-5-2 simply allows schools the option to take an intermission between the second and third sets. The intermission, including the required three-minute interval between sets, can last as long as five minutes total, and gives schools more time for promotional or ceremonial events.

“The committee’s aim with these rules was to make the contests run smoother,” Oakes said. “It gives schools the opportunity to use intermissions for special recognition, while keeping consistency from match to match.”

A complete listing of all rules changes is available on the NFHS website at www.nfhs.org. Click on “Activities & Sports” at the top of the home page, and select “Volleyball.”

Ben Sieck is a spring semester intern in the NFHS Publications and Communications Department and a junior at Butler University.