If and when you officiate a sports contest involving student-athletes with intellectual or physical disabilities, you may wonder: “Do I have to call the game differently from a “regular” high school game and make special accommodations for athletes with disabilities? Can I do so without compromising the integrity of the contest? Who decides what these accommodations are – the official or the sport’s governing body?”

Before answering, let’s look at some of the reasons this is even an issue.

Accordingly, state departments of education, local school districts and organizations that govern interscholastic sports around the country are providing – or are in the process of providing -- students with disabilities the opportunities to which they are entitled. They are not necessarily doing so because of laws or rulings, but because it is simply the right thing to do. Sports officials are active partners in helping these initiatives succeed. 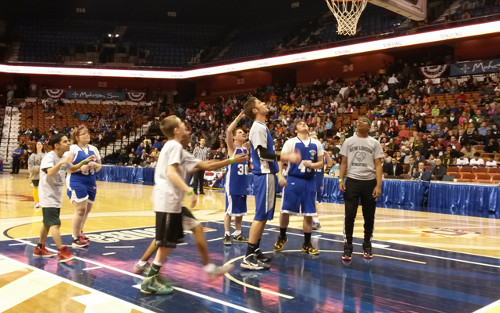 Unified Sports basketball teams competed during halftime of the 2014 Connecticut State Tournament finals held at the Mohegan Sun Arena in Uncasville, CT.  The Unified Sports teams were from the same schools as the varsity teams playing in those championship games. All season long, the officials donated their time and services at all Unified Sports events.

In the early 1990s, Special Olympics Connecticut and the Connecticut Interscholastic Athletic Conference (CIAC) formed a partnership to bring Unified Sports programs to Connecticut schools. The partnership has grown by leaps and bounds. Nearly 100 Connecticut high schools, 50 middle schools, and 35 elementary schools now have Unified Sports programs. In 2013, more than 2,400 athletes and 4,200 partners participated. Hundreds of sports officials donated their services at these events. The athletes represent their schools in tournaments which often draw large, enthusiastic crowds.

“Unified Sports includes many students who wouldn’t normally have the opportunity to participate in a school athletic program,” said Lou Pear, Connecticut Director of Unified Sports. “It also benefits students without disabilities, many of whom serve as partners for the athletes. Their involvement gives them a greater appreciation of their fellow students who are disabled and creates a more positive school climate.”

The Rhode Island Interscholastic League (RIIL) supervises athletic programs for its 54 member schools. It partnered with Rhode Island Special Olympics to create a Unified Sports league and championship event for fall volleyball and spring basketball. Thirty-two schools participate in basketball and more than 20 in volleyball. The RIIL is also considering developing adaptive programs in track and field for student-athletes who are disabled.

“Both the RIIL and Special Olympics embraced this program wholeheartedly,” said Assistant Executive Director Michael Lunney. “Our school principals have endorsed it. The students are enthusiastic. And our officials have been outstanding in their support of the program.”

The Massachusetts Interscholastic Athletic Association (MIAA), Special Olympics and the state’s schools have an informal relationship, which they are in process of formalizing to establish and implement Unified Sports programs. There is a Unified Sports Track and Field league which has operated in Massachusetts for the past couple of years, and the MIAA seeks to use that as a model for other programs that could be instituted state-wide.

“We want to expand athletic and educational opportunities for all of our students,” said MIAA Assistant Director Rich Riley. “Our goal is to develop a partnership with Special Olympics Massachusetts to implement Unified Sports programs.”

The New York State Public High School Athletic Association (NYSPHSAA) has partnered with the state’s Special Olympics organization to build a pilot program. It’s a competitive basketball league for student-athletes with disabilities. It has a spring season and a culminating event played at the Glenn Falls Civic Center, the venue for the state high school tournament championships. Special Olympics New York has about 70 Unified Sports programs and events, but this particular basketball program is the only one conducted in conjunction with the state’s athletic association.

“Ours is a Unified Sports program but teams will follow interscholastic rules and regulations the same as our regular high school sports. There will however be some modifications recommended by Special Olympics New York,” said Todd Nelson of the NYSPHSAA.

Some member schools expressed concern that this program might not be appropriate for some students with disabilities and lower skill levels. So the Association developed a skills competition (dribbling, passing, shooting, etc.), for such students. They will then compete at half time of the basketball games.

The NFHS supports implementation of Unified Sports programs by offering, in conjunction with Special Olympics, an online course for coaches called “Coaching Unified Sports.” The course and information about it can be found at here.

Unified Sports programs aren’t designed to address the needs of student-athletes with disabilities who also have the desire as well as, potentially, the skill to compete in regular high school athletic programs, including varsity sports -- provided certain accommodations can be made. The question is: What kinds of accommodations can or should be made? This is a gray area for school districts and state associations. There are no hard and fast rules. There is only a general guideline from the OCR that school districts make reasonable modifications, unless those modifications give the student-athlete with a disability a competitive advantage over athletes without disabilities, or if the modifications cause a safety problem.

The NFHS has similar language in its rulebooks as follows:

“Each state association may, in keeping with applicable laws, authorize exceptions to NFHS playing rules to provide reasonable accommodations to individual participants with disabilities and/or special needs … The accommodations should not fundamentally alter the sport, heighten risk to the athlete/others, or place opponents at a disadvantage.”

Right now, some states are making accommodations on a sport-by-sport and case-by-case basis. For example:

The question remains as to the role of the sports official with regard to taking such accommodations into consideration when officiating. First and foremost, the official should be made aware by the coaches prior to the contest if there is an individual competing who has a disability and check with someone with oversight of the contest about what, if any, accommodation is to be made. Although it is not a mandate, it is prudent and a good practice for the official to also inform the coaches of the opposing teams to make sure they’re aware of the situation at hand and the accommodation that will occur, so that any concerns can be allayed at the outset.

Joe Tonelli, Director of the CIAC Officials Association sums it up this way: “Whatever the sport or activity, if the participation of a student with a disability doesn’t significantly alter the game, provide an unfair advantage, or create a safety concern, you, the official, should permit the youngster to compete. But the main responsibility for providing athletic opportunities for students with disabilities rests with the school systems, not the sports officials.”

Ken Devoe is a freelance writer specializing in corporate communications. He has officiated high school basketball for the last 14 years in the New Haven, Connecticut, area and is past president of IAABO Board 10. He is also a member of the NFHS Officials Publications Committee.