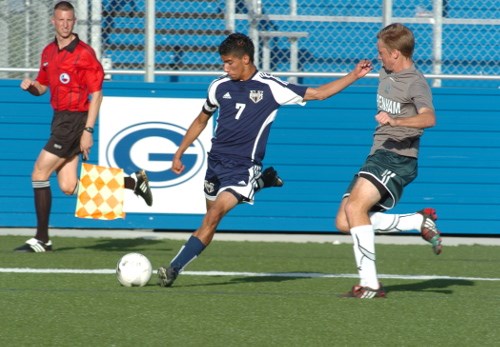 Beginning next season, changes to the conditions and procedure for restarting play with a dropped ball will take effect in high school soccer.

The dropped ball procedure was among 15 rules changes made by the NFHS Soccer Rules Committee at its January 20-22 meeting in Indianapolis and subsequently approved by the NFHS Board of Directors.

A dropped ball is also used when a ball is deemed out of play due to touching an official, remaining on the field and resulting in one of three scenarios. Rule 9-1-1b states that if a ball touches an official and remains on the field, it will be deemed out of play if it 1) creates a promising attack for a team, 2) goes directly into the goal, or, 3) changes possession.

“The committee felt it was unfair for the ball to touch an official, remain on the field and give an advantage to either team in any of the three situations outlined,” said Stan Latta, chair of the Soccer Rules Committee.

“The changes in Rule 16 will allow for a faster restart and alleviate the tendency to waste time,” said Theresia Wynns, NFHS Director of Sports and Officials and liaison to the Soccer Rules Committee.

Rule 14-1-3 clarifies goalkeepers’ positions during a penalty kick. Defending goalkeepers shall stand with at least one foot on or in-line with the goal line and the goalkeeper shall not be touching the goal posts, crossbar or nets. Forward movement is allowed provided both feet don’t come off the line until the ball is in play.

A complete listing of the soccer rules changes will be available on the NFHS website at www.nfhs.org. Click on “Activities & Sports” at the top of the home page and select “Soccer.”