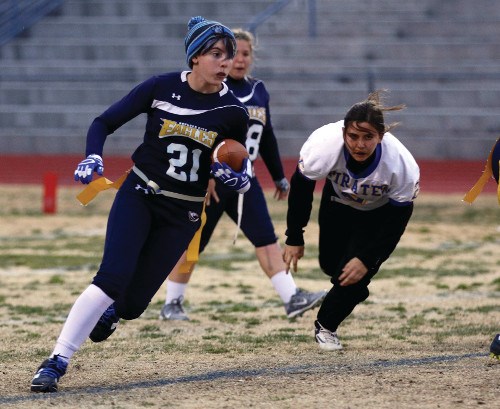 Flag football for girls has proved to be a valuable addition to the Nevada Interscholastic Activities Association (NIAA) since it was adopted as a pilot program in 2012 by the Clark County School District (CCSD) to fill a need for a winter girls sport at the Class 3A and 4A levels.

The sport, which enters its second season of NIAA sanctioning in December, is offered at 36 schools with an estimated 800-plus participants, all of which are a part of the CCSD in the greater Las Vegas area. CCSD Director of Athletics Pam Sloan said since starting the program, schools are adding junior varsity and B-level teams to accommodate the growing interest.

"It’s been a huge success out here,” Sloan said. “We had worked with the NIAA for those four years and they said let’s look at it. A lot of people didn’t believe every school would have a team during that first year, but every school did have a team. It was phenomenal. I think in the years that we have done this, there’s not been one school without a team at any of the levels.”

The CCSD remains the only school district in Nevada to adopt girls flag football since it was sanctioned prior to last season. According to NIAA Assistant Director Donnie Nelson, the NIAA’s Board of Control doesn’t require school districts to participate in the sport, thus easing the transition for its 36 CCSD schools.

One of the obstacles Nelson expected from adding the sport was the addition of a consistent set of rules for a sport that hasn’t been widely adopted. However, the NIAA and CCSD, working in conjunction with the Southern Nevada Officials Association (SNOA), collaborated to develop a rules and regulations manual. The group based its rules book on one used by the National Intramural Recreational Sports Association (NIRSA).

An unexpected benefit to come from adding girls flag football to its list of sports was an added opportunity for officials.

“It created a buy-in from our officials,” Nelson said. “Our officials now have a football season in the winter, per se. For officials looking for games and trying to create an interest in football for officiating, flag football did it. It’s similar in nature to football.”

Flag football games begin with the winter sports season in December and take place through February, at which time the NIAA hosts its NIAA Class 3A and 4A Nevada State High School Flag Football Championships.

“The incoming freshmen class has a chance to look at this andsee an active winter sport that is fast-paced and exciting,” Nelson said. “The way the game is conducted by the rules, it sort of looks like how football coach Chip Kelly ran his offense at the University of Oregon. It’s very entertaining for fans so it draws them in. The way the rules are structured, there’s only so many times a quarterback or running back can touch the ball. It’s not dominated by only a few players; everybody on the team has to be involved in offensive plays.”

In its first year, income from girls flag football rivaled that of girls soccer for the NIAA. Adopting it, in Sloan’s belief, has opened the door to students who previously were not participating in the school district.

“Flag football, more than any of the other sports, brings an opportunity for a vast variety of students to participate. That was one of our biggest sells,” Sloan said. “We have seen kids that never participated on an athletic team come out for flag football and be successful … These are kids who are typically not your volleyball or basketball players. These are your sprinters in track, for instance, or soccer players.”

“The future for flag football is extremely bright,” Nelson said. “Our first state championship was a huge success. Our attendance numbers were bigger than we expected. We’re not just having moms and dads show up; we’re having student body participation at games, so you have hundreds of people showing up. It’s outdoors and under the lights so there’s a lot of attraction for girls to see it as a fun sport. It’s not your powder puff game. It’s a very serious and well-structured game.”