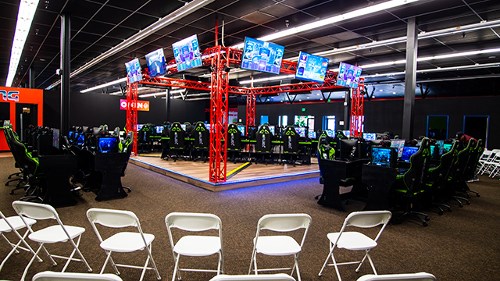 From the Alabama News Center:

An arena dedicated to eSports opened Friday in Birmingham, the first venue of its kind to open in the Southeast.

The Magic City ePLEX is located at the Crestwood Festival Center in Birmingham, filling 18,000 square feet with gaming and virtual reality. Tenesha White, one of the managers at the ePLEX, said the facility features top-of-the-line HP Omen PCs and consoles, as well as VR racing simulators from a Birmingham-based Nemesis Lab.

“Gaming is serious,” White said. “Some kids in eSports are getting scholarships for this. It’s very exciting to have this in Birmingham.”

The Magic City ePLEX operates seven days a week, offering tournaments, league play and team-building experiences for corporate outings. Co-owners Daniel Pahos and Daniel Seidel say the venue is not only the first of its kind in Alabama, but across the Southeast.

To kick off Friday’s grand opening, students from across Alabama competed at the ePLEX in the first-ever Alabama High School Athletic Association (AHSAA) eSports State Championship. Seidel said eSports is giving kids an opportunity to compete in school activities who normally would not have that chance.

“In the first year of AHSAA eSports in the fall of 2018, 403 students across Alabama competed,” Seidel said. “Of those 403, 350 had never participated in an extracurricular school activity. This is a great opportunity for them.”

Pahos said the top-end equipment, combined with a gigabit internet connection, is a big attraction because players have a ping latency of 5 ms or less.

“Many of these kids are used to ping rates of 40 to 60,” Seidel said. “These low-latency speeds level the playing field.”

Seidel said the team has started construction on a second ePLEX in Pearl, Mississippi, and they are looking at options in other cities around the Southeast. To learn more about the Magic City ePLEX, visit theeplex.com.