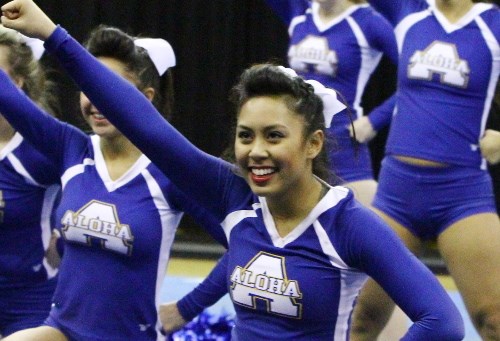 Ten rules revisions in cheer and dance which focus on minimizing risk to participants, along with 10 changes in the definitions section, are among the high school spirit rules changes recommended by the National Federation of State High School Associations (NFHS) Spirit Rules Committee at its March 2-4 meeting in Indianapolis.

All recommendations from the Spirit Rules Committee were subsequently approved by the NFHS Board of Directors for implementation in the 2018-19 season.

Four of the changes involved rules for inversions, including two revisions dealing with braced flips in a pyramid. Rule 3-3-5b now states that here must be three people involved in the toss and catch of the top person either as a base or spotter. In 3-3-5g, when the catchers are not the original bases, the new catchers are in place when the flip is initiated, remain close to the original bases and are not part of any other skill.

In a change to reduce risk of the top person, Rule 3-3-6a(1) was altered to ensure that releases from inversion to the performing surface or a cradle do not end in an inverted position.

The other inversion changes address both cheer and dance. The change in Rule 3-3-6b(1) (cheer) and Rule 4-3-6b(1) (dance) will allow additional inversions below prep level while maintaining contact with a base.

“The risk is limited due to the fact that the top person’s base of support is below prep level and the base will have contact with the top person until he or she is no longer inverted or has his or her hands on the performing surface,” said James Weaver, NFHS director of performing arts and sports and liaison to the Spirit Rules Committee.

The final change in the Inversions section involves an exception in Rule 3-3-6c(2) regarding a foldover that begins at or below prep level and does not stop in an extended position. Now, when the catchers are not the original bases, the new catchers shall be in place when the inversion is initiated, remain close to the original bases and are not part of any other skill.

In addition, the requirement for continuous hands-to-hands contact between the base and the top person in a single-base suspended roll was eliminated.

“The safety of the top person in a single-base suspended roll is covered in Rule 3-3-6c and does not require an exception to address the safety of the skill,” Weaver said.

Another change addressing risk management in both cheer and dance was made in the Stunting Personnel section of the Spirit Rules Book. In Rules 3-2-8 and 4-2-8, a spotter is required for tosses to single-base shoulder stands and single-base prep-level stunts in which the foot/feet of the top person is in the hands of the base.

“The spotting requirement for tosses to single-base shoulder stands will help decrease risk of injury to the top person’s head and neck area,” Weaver said.

In the Release Stunts section for cheer, Rule 3-3-5(f) now states that “when the catchers are not the original bases, the new catchers for in place when the transition is initiated, remain close to the original bases and are not part of any other skill.”

Two changes in tumbling rules were approved in dance. In an effort to minimize risk, Rule 4-8-8 now prohibits headstands, head spins and head springs in which the hands are not used for support. In Rule 4-8-2b, soft props may now be used during airborne or non-airborne tumbling skills in which hand(s) are not being used for support. The props cannot be made of hard material, or have corners or sharp edges.

In the Apparel/Accessories section, the committee approved a change in cheer and dance that allows participants to wear a head covering for religious reasons. The covering or wrap, which is not hard, abrasive or dangerous to other participants, must be approved by the respective state association.

A complete listing of the spirit rules changes will be available on the NFHS website at www.nfhs.org. Click on “Activities & Sports” at the top of the home page and select “Spirit.”

According to the most recent survey of NFHS-member state associations, there are more than 400,000 high school cheerleaders in the United States and, as of 2016-17, about 144,000 of those participants are involved in competitive spirit squads. The 2016-17 NFHS High School Athletics Participation survey lists competitive spirit as the ninth-most popular sports for girls. There are also about 35,000 girls who participate in dance or drill/pom teams, according to the same survey.