Tim Couch still among all-time leaders in the record book

And despite the fact that 19 years have elapsed since Couch’s gloried prep gridiron days, several of his performances still rank among the all-time best in high school history.

The 6-foot-5, 215-pound Couch made the Leslie County varsity football team as a mere seventh grader and backed up his brother, Greg, as an eighth-grader before starting the next four seasons. 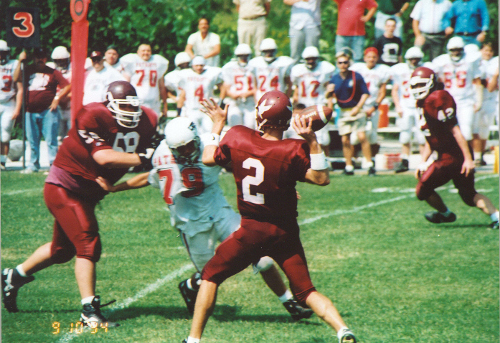 As a junior, Couch led Leslie County to a 13-0 start before losing to Covington Catholic in the Kentucky High School Athletic Association (KHSAA) Class AAA semifinals. The following season, Couch had eight games in which he passed for more than 300 yards, including a 533-yard, six-touchdown performance against Pikeville Shelby Valley High School in which he was pulled from the game just four minutes into the second half. In the process, he led Leslie County to an 11-3 season record and to the KHSAA Class AAA semifinals, where it fell to Fort Thomas Highlands High School.

“I think I was very fortunate in high school,” Couch said. “We had a lot of talent, but we also had a coach - Mike Whitaker - who had been a college quarterback and put in an offense that allowed me to do the things that I was capable of. We had some very good wide receivers in Dan Baker, Eddie Melton and Ric Hensley.

“I also had a burning desire to be great ‑ my work ethic was my strongest asset. I was always ‘pass first’ ‑ but running was a big part of my game too. We had running plays designed for me.

“As far as role models were concerned, I wanted to be like my brother, Greg, who is four years older than me and was an all-state quarterback who went on to play at Eastern Kentucky University.

“The National Football League (NFL) player whose style I emulated was Troy Aikman of the Dallas Cowboys. I grew up a huge Cowboys fan and Troy was someone who inspired me to want to someday become an NFL quarterback.” 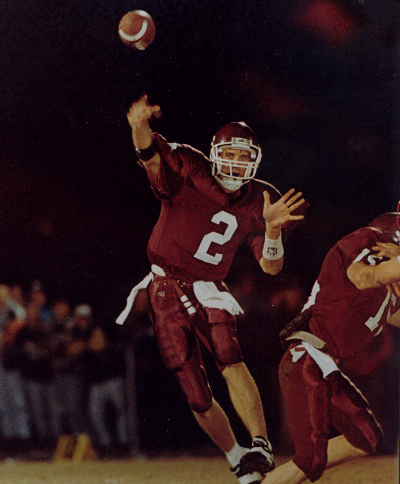 After high school, Couch played college football at the University of Kentucky and for the Cleveland Browns in the NFL. Despite having substantial experience at all three levels of competition, he looks back on his high school days with the fondest memories.

With an average of a million boys playing 11-player football every year (according to the NFHS’ High School Athletics Participation Survey) and 19 years having elapsed since his senior year, some of Couch’s performances have both withstood the test of time and the performances of 19 million student-athletes.

“That means a great deal to me,” Couch began. “When I was in the moment and playing high school football, I didn't really realize what we were accomplishing as a team and me as an individual. But looking back on it all these years later, it's hard to imagine that coming from that little small town that we were able to do things that no one had ever done in the history of high school football before and they still rank up there today. It's incredible to think about – I’m really, really proud of that.”

In addition to playing football, Couch was a standout high school basketball player who led the state in scoring with 35 points a game as a junior and scored 3,023 points during his career.

“I was a shooting guard in high school, and really considered myself more a basketball player than a football player until probably my senior year of high school,” Couch recalled. “I had a lot of offers to play college basketball in the Southeastern Conference (SEC) and in other conferences as well. I went to Kentucky with the intention of playing both sports.

“I chose Kentucky for several reasons. No. 1, it felt like the right thing to do and it felt like home to me. I had grown up a Kentucky basketball fan, but Kentucky football had much success when I was growing up. Coming out of high school, I had the opportunity to play ball at basically any school I wanted to; I chose Kentucky because I thought I could play early in my career and not have to sit behind anyone, and could play in the best conference in America (the SEC).

“Mostly, I enjoyed wearing a Kentucky jersey. I could've done the same things at any other school, but it meant more to me doing it at Kentucky because that was where my heart was. I got to play for my home-state school in front of my family and friends. Our greatest team accomplishments were beating Alabama the first time in 75 years, beating LSU on the road in a night game in Death Valley, and beating Louisville (our biggest rival) two times.” 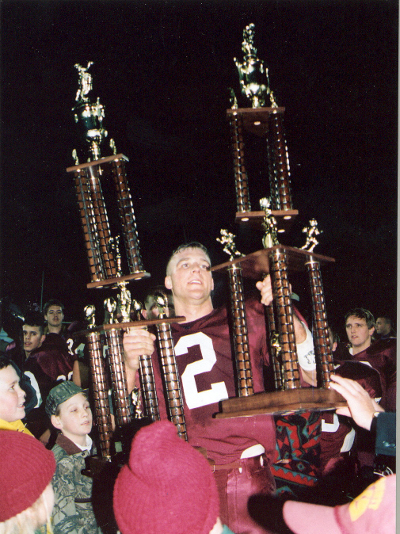 Following his junior season in which he was named First-Team All-American and was a Heisman Trophy finalist, Couch entered the NFL draft and was chosen No. 1 by the Cleveland Browns, for whom he played five seasons.

“I was really proud of the fact that we took an expansion team to the playoffs in my fourth year,” Couch stated. “That's the only time that Cleveland has been to the playoffs since it returned to the NFL in 1999.

“These days, I work as a television broadcaster for Fox Sports South in which I call SEC football games. As far as family, my wife Heather and I have two boys - Chase who just turned nine in August, and Brady, who is 5. Both of them are athletes ‑ they play baseball, basketball and soccer and Chase is playing football for the first time this year.”

From Concussion to COVID to Attendance Concerns, Football on Comeback.