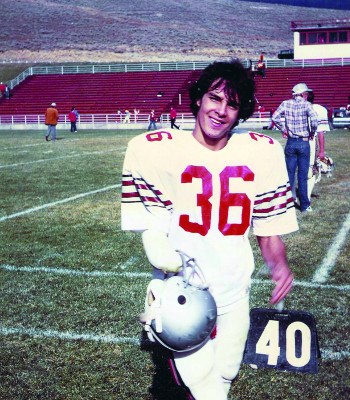 Tom Southall, who will be inducted into the NFHS National High School Hall of Fame July 2 in Reno, Nevada, excelled in football, basketball, track and music at Steamboat Springs (Colorado) High School. Born without his right hand and wrist, Southall was two-time football player of the year in Colorado and led his team to the 1979 Class 2A state championship. He set the state’s single-game rushing record in 1979 with 412 yards. In track and field, he set the state’s 2A long jump record in 1981 with a 23-4½ effort and helped Steamboat Springs to three consecutive Class 2A state titles. On the performing arts side, Southall was a member of the jazz band and concert band and was all-state in music on the trumpet. He received the Fred Steinmark Award as Colorado Male Student-Athlete of the Year in 1981. Southall currently is a teacher and coach at Cherokee Trail High School in Aurora, Colorado.

Q: You’ve had an astounding level of athletic success. What pushed you to accomplish what you did at the high school and collegiate levels?

Southall: For me, being born with only one hand, especially in middle school and high school, a lot of it was I wanted to prove I could do whatever I was faced with, whether it was learning new techniques in sports or being able to compete with everybody else. My freshman year into high school, one of the local doctors didn’t want to certify me as physically able to compete at the high school level, so that was definitely a challenge to me to show them I could compete with everybody else. Luckily there was another doctor in town who would sign my physical card so I could compete in high school.

Q: How early in life were you able to adapt to sports and prove you could compete?

Southall: My family was very supportive in helping me learn the different aspects of sports that I was participating in. From as early as I can remember, I was being put in a position to be successful in sports because of being able to practice with my family, in addition to the practices I would have with coaches and teammates. It was that extra outside help that made me feel comfortable competing. Whether it was Little League Baseball, pee-wee football or youth track, it took some extra practice and work to be able to master some of the skills and techniques for the various sports.

Q: What experience during your youth helped you get comfortable with sports competition?

Southall: When I was in very early pre-school or elementary, I went to a children’s hospital in Denver for some physical therapy. It was during the pre-school years that I would see kids at the children’s hospital who were missing legs or even both arms, so I learned at a really early age that being born with only one hand wasn’t that limiting of a disability. It was more of a mental adaptation than a physical adaptation in knowing that I could strive to overcome any obstacles I faced in sports or everyday life.

Q: Among interscholastic activities that you participated in, which was your favorite and why?

Southall: From a competitive standpoint, I think I enjoyed track the most. Part of it was because it gave you time in between races and events to really get to know and hangout with your competitors. That’s where we got to know the guys we were playing football or basketball against. Although it takes all day for a track meet to be completed, it was fun to have that time to get to know the guys I was competing against.

Q: What was the first activity in which you participated?

Southall: Probably the first organized sport was Little League Baseball. I had to learn how to hold a bat, be able to catch with the glove, take the glove off, and be able to take the ball and throw it. If you ever watched Jim Abbott play baseball, he had a little bit longer of a stub than I did but it was very similar to the technique that I used to catch and throw a ball. It was just one of those things where I had to figure out how the heck I was going to do it. I knew I needed to practice like any good athlete who is going to practice more than any of the official practice times or game times.

Q: In the early 1980s you garnered some time on national television. How did that opportunity come to be?

Southall: Steve Sabol and NFL Films came out in 1981 and came back in 1983 when I was in college to do some interviewing and filming. Steve Sabol went to Colorado College as well, so that’s why he kept tabs on me. It eventually aired on “That’s Incredible,” which as fate would have it, the night my episode aired was the same night and same time as the last episode of “M*A*S*H.” So my 15 minutes of fame were going up against Hawkeye (Alan Alda) and the cast of “M*A*S*H” in their last show. I think my grandma watched me, in addition to my mom and dad. 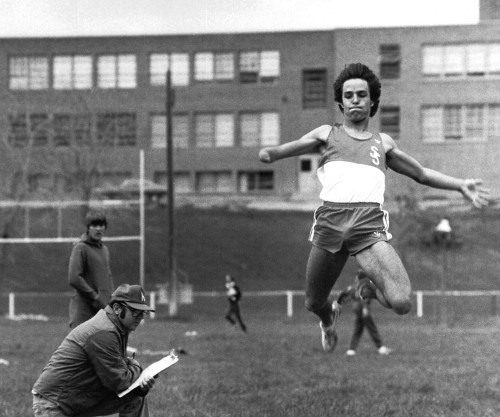 Q: How did your accomplishments in high school and college open the door for your current work as a coach and teacher?

Southall: I think growing up and seeing the impact that my coaches and teachers had on me made me keep the thought of being an educator in mind. I worked as a CPA for five years after I finished my master’s degree, but during that entire time, I was volunteering for junior achievement classes and coaching little league sports for the kids of my boss and other coworkers. I kept my feet in the teaching and coaching world until I got to the point where I was able to make more of an impact on society by becoming a teacher and coach, and hopefully being able to share my spirit of achievement, perseverance and how you have to work hard to overcome any obstacles that do come up. Those jobs have the perfect environment for those kind of messages to be passed on to the younger generation that are growing up in our schools today.

Q: How rewarding has it been to be able to translate your experiences to your student-athletes and Paralympic athletes?

Southall: I think I’m able to relate with the athletes that I work with, whether they’re veterans and Paralympic athletes, or Wounded Warriors and traditional athletes. I think part of it is knowing that you’re able to adapt to different situations. Whether it’s a different event that someone’s just learning – or with some of the older veterans I work with, they’re wanting to get involved for the first time in some aspects of athletics – they see that there are different ways to utilize the skills that they do have. If it’s with Paralympic athletes or Special Olympics athletes, they can see I’ve been kind of down the same road that they are traveling on and am able to empathize with them that it is going to be hard work. I’ve been there and been through that so I am able to help work with them and try to come up with a training regimen or technique that will help them use the abilities that they have to maximize it the best they can. I think some of the students and athletes that I work with see that I’m there to help them but we may have to do something a little out of the ordinary to do the things that they want to accomplish.