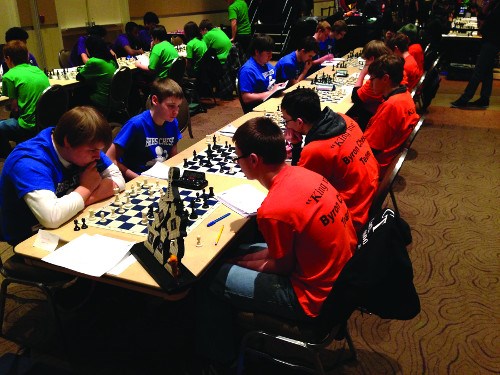 On a cold Saturday in February, the Civic Center Grand Ballroom in Peoria, Illinois, is filled with more than 1,500 high school students. Despite being filled to capacity with teenagers, the gala room that regularly hosts boisterous parties is pin-drop quiet.

Amidst a checkerboard background, the Illinois High School Association’s (IHSA) State Chess Tournament is unfolding for the 42nd consecutive year.

Chess is classified as an “activity” by the IHSA, which differs from its “sport” brethren in that school teams in IHSA activities are allowed to compete year-round, which in chess includes both in-person events and online competitions. The state final tournament crowns a team state champion, in addition to Board Medalists, presenting a rare format for the game.

“This is the largest team chess tournament in the country, and perhaps the world,” said IHSA Assistant Executive Director Scott Johnson. “People think of chess as an individual pursuit. Turning it into a team competition encourages players to help their teammates improve and fosters a sense of camaraderie. They cheer for each other after a good win – or even a good draw.”

Forget whatever chess stereotypes you may have, this tournament is chock-full of personality – so much so that the coaches worked with the IHSA to scale back things for the 2016 tournament. The chess play was always serious, but with no dress code in place, it wasn’t uncommon to see competitors in luchador masks, capes, cowboy hats, sun glasses and other accessories. Beginning in 2016, all teams began wearing matching shirts that featured their school name.

Teams still exhibit their individuality through their uniforms, while most also invoke team talismans that sit adjacent to the chess boards during matches, and those have ranged from plastic Captain America shields to WWE wrestling title belts in past years.

“This is a high school event and we want the competitors to have fun,” Johnson said. “However, our advisory committee also wanted the tournament to reflect the serious and competitive chess that is being played. After all, we wouldn’t let a basketball player in our state tournament wear a cape.” 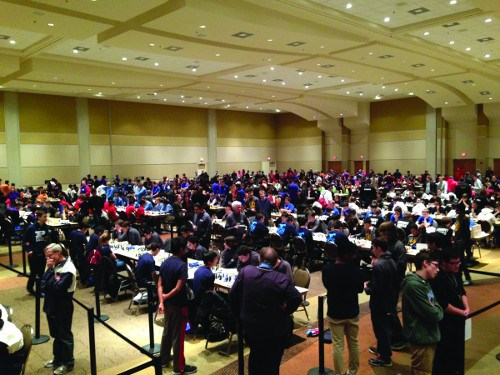 The IHSA State Chess Tournament was the brainchild of Mike Zacate, a longtime teacher at Evergreen Park High School (15 miles west of Chicago). An avid player, Zacate learned how to pair tournaments in the 1960s while working with members of the Illinois Chess Association and has gone on to become a respected national figure for his contributions to the game. Capitalizing on the popularity of chess brought on by Bobby Fischer in the early 1970s, Zacate worked with the IHSA and the inaugural state tournament was conducted in the winter of 1975.

Early state tournaments were conducted in two classes split by enrollment, but the format reverted to a single class in 1995. The 2016 IHSA state tournament was a one-class, open event with 146 teams competing. In the current format, each participating team can play up to eight players. Coaches assign players to a board based on their skill (Board 1 most skilled, Board 2 second-most skilled, etc.) and seven rounds are conducted, with each player participating in one game per round. In team competition, a win on Board 1 is worth 12 points, Board 2 is worth 11 points, and so on down the line. There are 68 total points available in a team match, so a score of 34½ points is enough to clinch a win.

The tournament is nearing maximum capacity, which has led to discussions by the advisory committee on qualifying standards or tournaments, which could come to fruition in the coming years.

“The growth hasn’t surprised me at all,” Johnson said. “Chess is an activity that draws interest from a diverse group of students within a high school and has minimal costs associated with it. It is a great program for a high school to be able to offer, and I am proud that our association has provided a first-class state final experience to our member schools for more than 40 years.”

Those numbers should only continue to grow as the Illinois Elementary School Association (IESA), under the direction of Zacate, started its own state tournament in 2011. The IESA tournament had players from 115 schools compete in sixth-grade, seventh-grade and eighth-grade divisions a year ago.

The IHSA State Chess Finals are conducted in the same building as America’s Original March Madness, the IHSA Boys Basketball state finals, which annually draws a great deal of media attention and fanfare. While the chess tourney hasn’t drawn the caliber of celebrity fans as its counterpart, where Michael Jordan and Dwayne Wade have been recent attendees, it also hasn’t gone unnoticed.

High school chess in Illinois was the subject of a documentary film in 2015 entitled “Chess State,” while some of the top chess players in the world have made the trip to Peoria for the IHSA state tourney. Grandmaster Yury Shulman, a native of Belarus who now lives in the Chicago area, has been a regular at the tourney for the past eight years, meeting with players and coaches to teach and discuss strategy. Those lessons occur in a separate room, known as the “skittles room” (not for the candy, a casual non-clocked game is referred to as a skittles game), where players who are waiting to play kill time by playing chess or some even bring multimedia setups to play video games.

The skittles looks and sounds much more like what you would expect from a room full of teenagers, but the ultimate goal remains the silence of the grand ballroom.

“This is their Super Bowl,” said IHSA Executive Director Craig Anderson. “For high school chess players in Illinois, there is no bigger event.”