Every coach in every sport inevitable asks this question … “How can we get the most out of practice time?” Invariably the answer itself is in the question – What is the value of time? When time is the ultimate determining factor and not the task, it is amazing the efficiency that occurs. By embracing a few small changes, you can double the amount you accomplish and actually practice less.

Building the Framework – a Simple Plan

1. Utilizing the game clock – time everything

The most under-utilized piece of equipment on any football field is a scoreboard and game clock. It sits idle most of the year and is turned on at most 15 times in a football season. It also can be used to keep track of practice periods. If you have 15-minute periods every day, why not put 15 minutes on the clock and count it down? Two positive effects come from this. First, it forces your assistant coaches to be accountable for their practice time. The coaches know before the week begins how much time they will have with their players and can plan accordingly.

Second, it allows for your players to become shareholders. They know how long each period is and what they are being asked to accomplish. It also limits off-task behavior because the players never wonder how much time is left in practice. As a side effect you are also reinforcing clock management for the players as they become accustomed to the game clock and the importance of time within a game.

Most importantly, it teaches the value of the clock since no one can just put more time back on the clock – not even the head coach.

2. Cutting out the fat

Some suggestions that are put forward may sound plausible, while others seem out of the question. But to put it bluntly – these ideas work and when you look at the value placed on it, the numbers back it up.

If you are running plays for longer than 15 minutes, most likely it is a waste of time. In today’s day and age, kids’ attention span is not all that long so no period should be longer than 15 minutes. The high school play clock is 25 seconds from the time the ball is set and ready for play. Based on that number and the 15-minute period, a well-organized team period should render 36 plays. This forces your coaches to coach on the fly and to simplify their instruction. It also places even more value on the individual time you have with the players. And for those who hate penalties – you can forget delay-of-game penalties because it teaches the kids to hustle (1038 Offensive plays – four delay-of-game penalties).

By doing a 15-minute period of offense followed by a 10- or 15-minute first-down period, a team could execute 60-plus plays in 30 minutes or less. Most of the time, a 40-minute team period results in roughly 30 or so plays.

By pre-scripting every period, the coach is able to cut down the “uh time” (time when coaches are deciding what play to run next). When you script 15 to 30 plays of offense or defense, it allows for faster and more effecting play calling.

This may sound crazy but it makes sense. If a coach plans just four five-minute water breaks every practice, that is 20 minutes spent on water in a three-hour period. In reality, most coaches script more than four. For argument’s sake, if we practiced 92 times this year and we had four five-minute water breaks, it would result in 1840 minutes spent on water. Don’t get me wrong hydration is important, but that means more than 30 hours spent drinking water.

As a suggestion, have each assistant coach or perhaps injured or reserve players, carry two water bottles each. As the players go through their drills, when they need water they simply grab a squirt then hop back in. During period changes, replace empty bottles with full ones and now the athletes are hydrating on an as-needed basis. What this does is cut down on down time where 50 kids are waiting to drink from 12 bottles or socializing and off task behavior by players or coaches.

PROMOTE OR FIRE YOUR JV STAFF

If you made it through the last section, then stick with me on this. Rather than having a varsity and junior varsity coaching staff, simply build an offensive staff and defensive staff. It allows you to do more with fewer coaches and every lesson is stronger the second time it’s taught. Ever notice that the defensive coaches may not be as energetic during offensive portion of practice? By having them specialize as an offensive or defensive coach, it allows them to coach both varsity and junior varsity. This creates a streamlined and smooth transition for players from the junior varsity to the varsity program.

Think about it – same terminology, same drills and same coach for three years allows players to develop at an accelerated rate and gives the coaches insight to know how best to work with individual players. The first half of practice the varsity works with the offensive staff, while the junior varsity works with the defense. After an hour the kids switch sides of the field and the practice session repeats itself with the other squad. The game day benefit is fantastic as well as it allows the coaching staff to use the junior varsity game as an experimentation for the varsity game plan.

NO CONDITIONING . . . at practice.

We lift in the morning before school – this is also when we condition. Because the athletes see conditioning as a positive part of their lifting program and not a punishment, they actually embrace it. And you have now freed up 10 to 15 more minutes of practice time.

Between kickoffs, punts and returns, special teams account for roughly 20 percent of any football game. In theory, that means that 20 percent of practice should be spent on special teams. That means that in a three-hour practice, the special teams’ period should be approximately 36 minutes. Most coaches would stop reading this at the mere mention of a half-hour period of kicking, but in order to prepare your squad for battle you must first look at the inadequacy of the current practice model.

Breaking Down the Plan 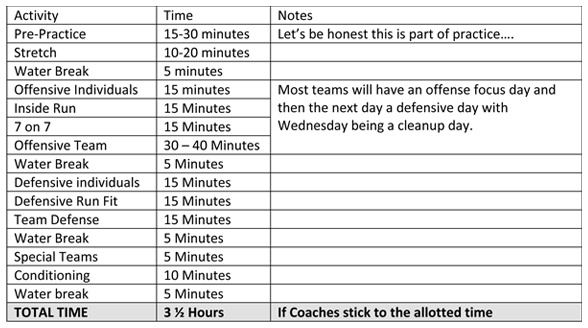 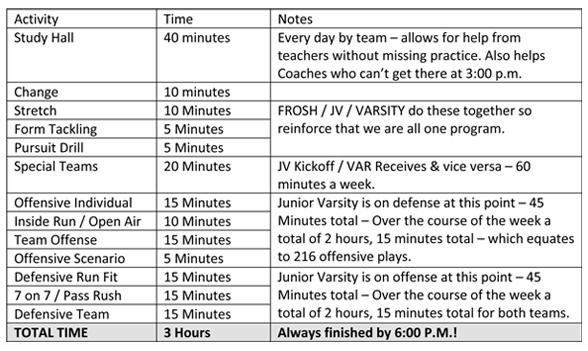 Jeff Walters is the football coach at Liberty High School in Brentwood, California.