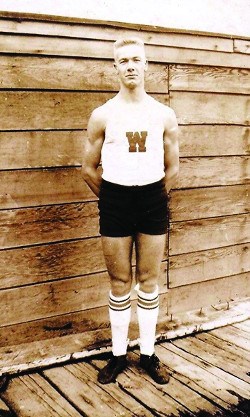 Long before his extraordinary life became the centerpiece of author Daniel James Brown’s book The Boys in the Boat: Nine Americans and Their Epic Quest for Gold at the 1936 Berlin Olympics, Joe Rantz was a student-athlete at Roosevelt High School in Seattle, Washington, whose participation in high school sports would lead to the opportunity to attend college and participate in the sport of rowing – endeavors that would provide a path not only to Olympic glory, but to redemption from a Dickensian boyhood of poverty, deprivation and abandonment during the Great Depression and to the development of a transcendent level of tenacity that empowered his survival of the type of unimaginably hardscrabble youth so commonplace among the members of what is now referred to as the Greatest Generation.

The Boys in the Boat, originally published in 2013 and which in the ensuing years has spent 117 weeks in the top 10 on the New York Times nonfiction bestseller list, including 15 weeks at number one, has been compared by commentators and book reviewers to other Depression-era sports stories such as Laura Hillenbrand’s chronicle of the life of Louis Zamperini in Unbroken, Jeremy Schaap’s account of the life of boxer James J. Braddock in the book Cinderella Man, and Colin Welland’s Oscar-winning original screenplay about the sporting lives of Eric Liddell and Harold Abrahams, depicted onscreen in the 1982 Academy Award Best Picture, Chariots of Fire.

Born March 31, 1914, in Spokane, Washington, and raised primarily in the small town of Sequim, 65 miles northwest of Seattle, Rantz’ mother died when he was three and his father soon remarried. At age 10, despite being a good-natured, well-behaved boy who was a diligent student in school and who got along well with his four half-siblings, Joe was exiled from the family’s home by his stepmother, who did not want him to live under the same roof as her biological children and share in the family’s limited resources.

For more than a year, Rantz slept in the town’s one-room schoolhouse which would be left unlocked at night, and he foraged for food by fishing, hunting and working odd jobs. Eventually his father insisted that Joe be allowed to return to live with the family, but at age 15 he returned home from school one afternoon to find the family car packed for a move in search of a better life – a relocation for which his stepmother would not allow him to accompany the family nor even disclose their destination – and Rantz watched the tail lights of the car disappear as his father failed to this time intervene on his behalf, leaving the high school sophomore completely on his own. 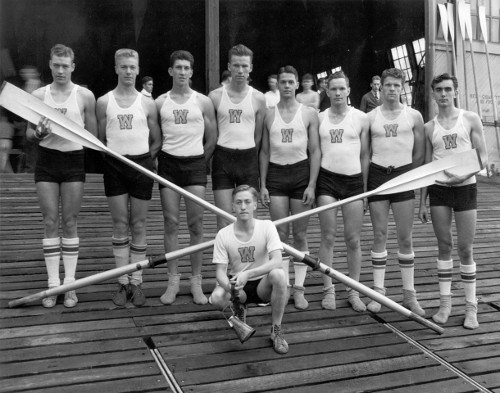 For the next two years, Joe lived alone in a half-finished cabin in the woods outside Sequim, surviving financially by logging timber, clearing tree stumps, baling hay and building fences for farmers, all the while continuing to attend school in Sequim and making good grades. In 1931, his older brother Fred, who had married, and gotten a job as a teacher at Seattle’s Roosevelt High School, invited the 17-year-old to come live with him and his wife. Attending Roosevelt for his senior year, no longer having to engage in a daily struggle for a subsistence level of food and shelter, Joe thrived, excelling academically – especially in science and mathematics – and becoming involved in a variety of extracurricular clubs and activities, including high school sports.

One day during gymnastics practice, Joe was performing a maneuver on the high bar when the University of Washington rowing coach, Al Ulbrickson, visiting Roosevelt for another purpose, walked through the gym and took note of the 6’ 3” powerfully-built high school senior and stopped to encourage him to attend UW and try out for the crew team. In that pre-athletic-scholarship era, to save the funds necessary to begin college, Rantz worked for 15 months after graduation on two WPA projects – the first, a job manually digging and paving highways, and the second, a position helping to construct the Grand Coulee Dam, work for which his 60-hours-per-week role was to rappel down cliffs and, dangling in mid-air, use a jackhammer to clear rock from a mountainside.

Enrolling at UW in the fall of 1934, Rantz’s living quarters for his years at the university would be a closet-size room in the basement of a local YMCA and unlike many of his well-dressed classmates, he wore the same worn flannel trousers and faded sweater throughout his college years, a wardrobe that made him the target of taunts from elitists on campus. But displaying the prodigious strength and unfailing determination developed during his youth, he made the freshman rowing team and a year later was selected for the prestigious varsity-eight boat, a team made up of kindred spirits to Rantz, all Depression-era sons of dockworkers, loggers, farmers and manual laborers. The crew would go on to beat the best shells from the U.S. and abroad – including archrivals Cal-Berkeley, Harvard and Yale – on the way to the U.S. National Collegiate Championship, rivals such as Oxford and Cambridge in international regattas, and on July 5, 1936, in Princeton, New Jersey, college squads from across the country at the U.S. Olympic Trials to qualify as America’s representative at the Summer Games in Berlin.

On August 14, 1936, in the Olympic eight-man finals, held on the Spree River in the Berlin suburb of Grunau in front of a crowd that included Adolph Hitler, Herman Goering and other Nazi officials, 75,000 German spectators, and a global radio audience estimated at 300 million, the U.S. shell was in last place out of six at the halfway mark of the 2,000-meter race. Now legendary as perhaps the greatest crew of all-time for the ability of all eight of its rowers, guided by their coxswain’s exhortations through a megaphone, to lock into a mystical, almost spiritual, communion of perfectly-timed strokes and transcendent physical effort – a level of true grit possible only from an octet of young men who had suffered through the extraordinary challenges of the Great Depression – Rantz and his squad cranked its pace from the 32-strokes per minute it had averaged during the first half of the race to a theretofore-unheard-of 44-strokes per minute down the stretch, all the while maintaining perfect synchronicity and avoiding the dreaded, race-ending moment when a rower “catches a crab” with an oar – a misplaced insertion where the blade, however briefly, sticks in the water and halts the forward-gliding momentum of the shell.

With 200 meters to go, the U.S. passed Hungary; at the 100-meter mark Switzerland; and at the 50-meter line Great Britain. At the finish line, the U.S., Italy and Germany appeared to be in a dead heat and for several minutes after the race, as the judges examined photographs of the finish, the crowd incessantly screamed “Deutschland, Deutschland” and German propaganda filmmaker Leni Riefenstahl continued to record the proceedings, archiving footage of the race that can still be easily found online using any search engine. 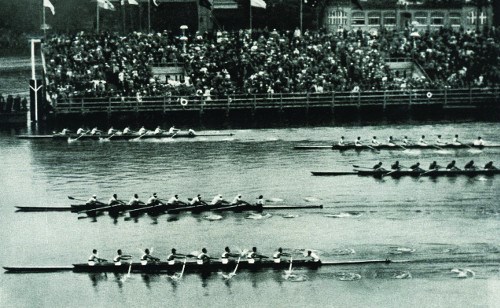 After a five-minute wait, the crowd quieted as the loudspeakers cackled to life for the announcement of the final results: U.S. 6:25.4, Italy 6:26.0, and Germany 6:26.4. Rantz and his crewmates had won the gold medal by six-tenths of a second and three feet. And although the 1936 Olympics are now perhaps best known for U.S. sprinter Jesse Owens winning four gold medals and U.S. distance runner Louis Zamperini running the fastest final lap of a 5000-meter race in Olympic history, sportswriter Grantland Rice declared the eight-man crew final to be the “high spot” of the Games and broadcaster Bill Henry who called the Olympics for CBS radio, referred to the race as “the outstanding victory of the Olympic Games.”

Rantz would go on to graduate in 1939 from the University of Washington with a degree in chemical engineering, wed that same year his college sweetheart Joyce to whom he would remain married for 63 years until her passing in 2002, and work for the Boeing Corporation in Seattle for 35 years, but with his life focused most-of-all on providing for he and Joyce’s five children a secure and loving upbringing and the parental fidelity of which he had been deprived as a child. Joe Rantz died on September 10, 2007, at age 93. In April 2016, the Weinstein Film Company announced its acquisition of the movie rights to The Boys in the Boat, with Kenneth Branagh slated to direct, Chris Hemsworth cast as Joe Rantz, Daniel Radcliffe as coxswain, and other team members to be portrayed by Bradley Cooper, Armie Hammer, Hayden Christensen, Taylor Kitsch, Garrett Hedlund, Michael DiSanto and Rob Munn. The film is scheduled for release in late 2018.

Lee Green is an attorney and Professor Emeritus at Baker University in Baldwin City, Kansas, where for 30 years he taught courses in sports law, business law and constitutional law. He is a member of the High School Today Publications Committee.