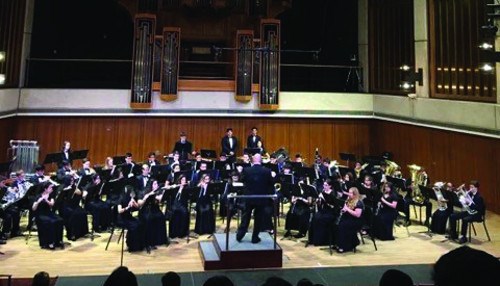 Each year in May, the Texas University Interscholastic League (UIL) music program offers a State Wind Ensemble Festival, providing a unique learning experience for the student musicians and music directors who participate. Each group performs for an audience of at least two other participant bands, receives written and verbal critiques from a three-person panel of nationally recognized evaluators, and is given a clinic/performance review by one of the evaluators.

According to Bradley Kent, UIL director of music, evaluators/ clinicians typically rehearse a few sections of each ensemble’s music to best demonstrate how to achieve a best musical performance, while highlighting some of the most outstanding moments of the performance. Each ensemble is given a plaque in recognition of their musical excellence and the evaluators may recognize individuals and/or sections from each group to receive an award for exemplary musical achievement.

The festival is held on the University of Texas at Austin campus in Bates Recital Hall at the Butler School of Music. Due to time and facility availability, 16-18 concert bands are accepted annually on a first-come, first-served basis. Any varsity concert band receiving a Division One rating at its region’s concert performance evaluation is eligible to enter.

The current non-competitive festival format began in 2000, under the leadership of Richard Floyd, now state director of music emeritus. Previously, the event had been a contest where groups were compared against each other for ratings and/or rankings.

“The change was pretty much driven by my vision for UIL Music to host an event that was all about the celebration of making music and the joy of sharing it with others, as opposed to the quest for a trophy,” Floyd said. “Contests tend to focus on the craft of the music and I wanted the emphasis to be placed on the art of musical performance. It was my goal that by eliminating the competition aspect we could cultivate a positive environment that would foster a deeper awareness of the priceless intrinsic qualities of music performance.”

“Our students would perform at a high level, knowing they were playing for the sheer joy of music performance,” said Robert Vetter, retired director of bands of the Robinson Independent School District. “Each group was expected to attend the performance of at least two other groups. Our students enjoyed listening to bands from across Texas and they especially loved playing for their peers.”

Keith Lancaster, director of bands at Dripping Springs High School for 20 years who retired in December, said, “The level of adjudication is first rate,” he said, “and the comments given are always helpful. One of the best parts of the festival is the clinic immediately following the performance. I have found our students have grown musically each and every time we have performed at this event. They have become more confident as performers and individual musicians based on this experience.” 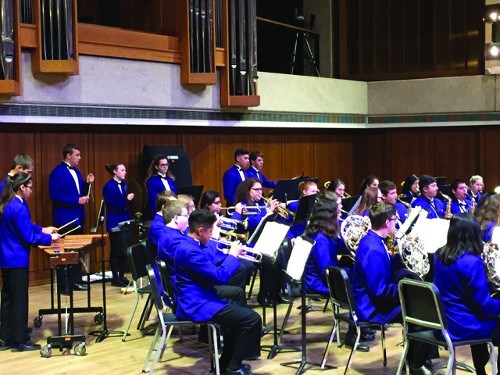 The first two years or so after the change to the festival format, participation dwindled.

“No one seemed to know what to do if they were not trying to beat somebody,” Floyd said. “And, the notion of an evaluator working with a band and its director right after its performance was apparently intimidating. Participants were also expected to listen to the performance of other bands, as well, as opposed to running off to a water or amusement park.”

“We were in uncharted waters,” he continued. “But the bands that did come had great experiences and spread the word. The next thing you knew, we had a waiting list with more bands than we could possible host – eager to attend. And as they say, the rest is history.”

Treva Dayton is a former classroom teacher, forensic coach and theatre director. She has served as state director of speech and debate for the Texas University Interscholastic League and as an assistant director for the NFHS. She retired as director of academics for the UIL. Dayton is a member of the High School Today Publications Committee.