The development of fair, practical and legally sufficient policies regarding the inclusion of transgender athletes in sports activities is one of the latest civil rights challenges facing sport governing bodies and educational institutions. Even before the debates erupted during 2016 concerning the enactment of state legislation limiting transgender rights, many school districts across the country had for years been in the process of taking proactive measures to protect such students against discrimination, make the school environment safer and more welcoming to them, and reduce the harassment that has resulted in transgender students often being the target of hate crimes and suffering one of the highest suicide rates of any demographic group.

Statistics compiled by the FBI’s National Incident-Based Reporting System (NIBRS) reveal that more than 20 percent of hate crimes over the last decade were based on sexual orientation and gender identity, second only to race as the motivating factor, and the July 2016 issue of the New England Journal of Medicine attributed the suicide-attempt rate among transgender individuals of just over 40 percent (compared to 4.6 percent among the cisgender population) to the substantial levels of discrimination, rejection, harassment and violence suffered by the group.

The controversy over providing equal protection under the law to transgender students with regard to their participation in school programs such as athletics and their access to school facilities such as restrooms, locker rooms and shower rooms is – obviously – about far more than merely the legal dispute it would appear to be on the surface. It is a political issue involving fear of those who are different from oneself, the oft-manifested tendency of a majority group to ostracize any minority group that deviates from what are viewed as behavioral norms, deeply-rooted resistance by many persons to social change, an inability by some to accepting evolving gender roles in society, federalism questions regarding the authority of the U.S. Department of Education and its Office for Civil Rights relative to that of state legislatures and local school governance organizations, and the polarization of viewpoints across the citizenry with regard to the moral and ethical obligation to protect those among us who may be the most vulnerable to harassment and violence simply because of who they are.

The following are the key issues for which district policies need to be developed and implemented, the sources of law governing those policy topics, several recent court case decisions regarding transgender rights, and a recommendation for school and athletic administrators.

Transgender Issues Regarding Which School Policies Need To Be Developed

The following are transgender issues with which school and athletic administrators need to be familiar, for which school policies should be developed and implemented, and regarding which district and athletic leaders need to ensure all school personnel receive in-service training.

The details regarding each of these topics far exceed the scope of this article, but are available in three excellent resources – a 24-page publication from the National Association of School Boards titled Transgender Students In Schools: FAQs & Answers (www.nsba.org), a 25-page policy guidance from the U.S. Department of Education titled Examples of Policies & Emerging Practices for Supporting Transgender Students (www2.ed.gov), and a 57-page publication from the National Center for Lesbian Rights titled On The Team: Equal Opportunity for Transgender Student-Athletes(www.nclrights.org).

Sources Of Law Regarding Transgender Students

The following are the key sources of federal and state law providing protections from discrimination for transgender students; the clear trend is an evolution of legal standards nationwide towards increasing the safeguards for LGBTQ individuals against mistreatment based on sexual orientation or gender identity. 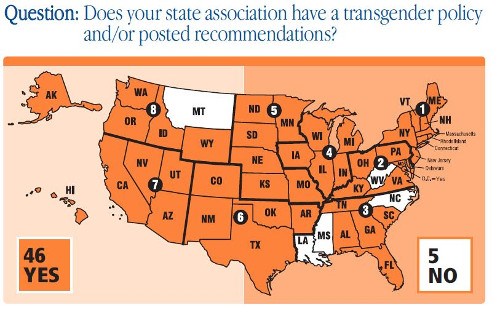 G.G. v. Gloucester County School Board (U.S. Court of Appeals for the Fourth Circuit – April 2016): A three-judge panel of the U.S. Court of Appeals for the Fourth Circuit ruled that the refusal by a school to allow the use by transgender students of school facilities (such as a restroom) consistent with their gender identity is unlawful because such restrictions constitute gender discrimination specifically prohibited under Title IX as clarified by the May 2016 DCL. The case involved a female-to-male transgender boy who had been using the boys restrooms at Gloucester High School (Virginia), with no problems arising from his use of those facilities until community members objected, followed by the school district enacting a ban on the practice. In May 2016, the Fourth Circuit refused to grant an en banc rehearing of the case (with all 17 active judges participating). In August 2016, the U.S. Supreme Court issued a stay of the original Fourth Circuit ruling, pending its decision whether to hear an appeal of the case. In October 2016, the Supreme Court granted certiorari and will review the case to resolve two issues: 1) Whether courts should defer to the May 2016 DCL; and 2) whether educational institutions covered
by Title IX must treat transgender students consistent with their gender identity. More than 7,000 petitions for appeals are received by the Supreme Court each year and approximately 80 cases are granted review. The G.G. suit is considered by most legal experts to be the most significant case on the Court’s docket this term; oral arguments will likely be held in March of 2017, with the Court’s ruling in the case expected in June.

State of Texas v. U.S.A. (U.S. District Court Texas – August 2016): In a suit filed by a coalition of the attorneys general of 11 states, a federal judge blocked implementation of the May 2016 Title IX DCL requiring schools to provide access for transgender students to facilities such as restrooms consistent with their gender identity pending resolution of issues concerning the validity of the DCL as a source of law and whether the definition of sex in Title IX should be interpreted as gender identity or anatomical gender at birth. The U.S.A. has filed an appeal of the ruling with the U.S. Court of Appeals for the Fifth Circuit and the U.S. Supreme Court’s decision in the G.G. case will likely impact the ongoing viability of the ruling in the State of Texas case.

Carcano v. McCrory (U.S. District Court North Carolina – August 2016): In a ruling issued just five days after the decision in the State of Texas case, a federal judge in North Carolina, using the May 2016 DCL and relying on its interpretation of the word sex in Title IX to be gender identity, issued an injunction blocking implementation of North Carolina’s law known as HB2 which effectively would prohibit anyone in the state from using any restroom or facility inconsistent with their anatomical gender at birth. As with the State of Texas case, the U.S. Supreme Court’s decision in the G.G. case will likely impact the ongoing viability of the ruling in the Carcano case.

In the last two years, dozens of similar lawsuits have been filed across the country, most challenging the enactment of policies designed to protect transgender students, with their resolution now on hold pending the Supreme Court’s ruling in the G.G. case.

School and athletics administrators should research and familiarize themselves with the requirements included in any applicable state statute, state association policy or board of education regulations and develop district-wide and sports program-specific policies addressing all of the transgender issues discussed above.

The most useful template for such a policy – one that could be revised and edited into a structure consistent with any state or local legal mandates – is a model high school policy addressing transgender sports participation and facility use that was issued in 2016 by the National Center for Lesbian Rights and which is titled All 50: The Transgender-Inclusive High School Sports & Activities Policy &
Education Project. It is available at www.nclrights.org.

Lee Green is an attorney and Professor Emeritus at Baker University in Baldwin City, Kansas, where for 30 years he taught courses in sports law, business law and constitutional law. He is a member of the High School Today Publications Committee. He may be contacted at Lee.Green@BakerU.Edu.