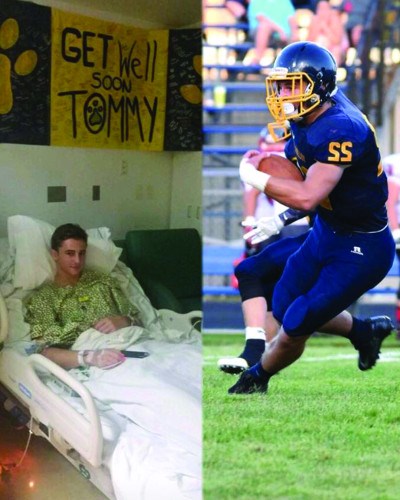 Tom Pettry’s life was forever shaped by a single impact on the high school football field. It was Pettry’s freshman year at Olmsted Falls (Ohio) High School when the collision occurred. The result was a concussion.

The next day abdominal pain, a persistent headache and a worried mother forced Pettry to seek emergency medical attention. After an emergency appendectomy, the single impact on the field was beginning to take on a greater purpose. Two weeks later, Pettry was sitting in his living room recovering from surgery when his parents informed him of the carcinoid tumor found in his appendix.

No one anticipated the significance this one physical impact would have on Pettry’s life and the lives of those around him.

“The concussion was definitely a blessing in disguise,” Pettry said. “I would be dead if I wasn’t playing at that moment and wouldn’t have gotten that concussion. I went to the hospital for the concussion; if I hadn’t gone to the hospital, my appendix would have burst and the cancer would have spread just about everywhere in my body and I would have been dead.”

Pettry started playing flag football at five years old, and by his first year of tackle football in third grade he was hooked.

“I mean flag football was fun and I loved it, but I think I realized that I loved it and it was something that I wanted to keep doing when I was nine. I loved everything about it,” Pettry said.

“I loved going and actually playing on high school fields [as a freshman]. Then from ninth grade to sophomore year it was an even bigger leap and it was like a whole new world and everything just stepped up twice and everything was just bigger – playing on our home field with our home fans. It was just a lot more exciting – a lot more real,” Pettry said.

Home games bring the community out, and the environment they create is what Pettry loves most about high school football.

It was the Olmsted Falls community that inspired Pettry’s comeback. He had lost a significant amount of weight after his surgery and was told by doctors to take it slow. They even went so far as to dare to tell Pettry that he wouldn’t be back to normal until at least a year post surgery. Pettry’s response, “Doubt it. I’m going to be back and better than ever.”

Two months later and Pettry was eating a ton of calories to put weight back on and working out twice a day getting ready for his sophomore season. “I guess in a way I wanted to shock everybody and show them that you can do anything you put your mind to,” Pettry said.

An even greater reason that Pettry wanted to get back on the field was the love and support of his community.

“It’s one thing to do it for me – because I love football and I’ve been doing it for so long and I like to push myself – but I also do it for the people around me and for the city because the city was so supportive and loving.”

Tom DeLuca, in his fifth year as Olmsted football coach, knew before Pettry’s comeback that this athlete was special.

“Tommy found out about the cancer the day of the biggest game of the year and he got on the bus and still went to the game. That’s all I needed to know right there,” DeLuca said. “I know he was on that bus for more than a couple of reasons – one, his friends were on there and two, he has the team mentality like no other and those were the things that stood out to me.”

Pettry’s impact on his teammates and coaches has been inspirational. He never brings up the battle he fought and won, the surgery he faced or the mental impact of his diagnosis. Instead, he suffers through the same two-a-days in the heat and humidity as the rest of the team – catching the occasional jab from DeLuca – “What’s your excuse today, you got cancer or something?” The impact of putting your current circumstances into perspective, is immediate. What’s a little heat and humidity when the guy next to you beat cancer?

As Pettry looks to his future, he sees a place for himself in the emergency medical field. In less than a year, he will be a certified EMT and is thinking about pursuing a career in firefighting. No one is surprised by his selfless career pursuits.

It was one impact on the football field that set off a series of events that eventually saved Pettry’s life. Since then, multiple lives have been impacted by Pettry’s determination, toughness and genuine care for others as he proved to the entire community that you can do anything you put your mind to.

Blocking Below the Waist in Free-Blocking Zone Addressed in High Scho.